How did the universe begin? How will it end?

Scientists think the universe began with a bang. A big bang. The Big Bang theory (no, not the TV show) is the most widely accepted theory for how the universe started. How it will end…that’s a “dark” mystery.

Wait, start at the beginning. Of everything.

The Big Bang theory says that the universe came into being from a single, unimaginably hot and dense point (aka, a singularity) more than 13 billion years ago. It didn’t occur in an already existing space. Rather, it initiated the expansion—and cooling—of space itself. 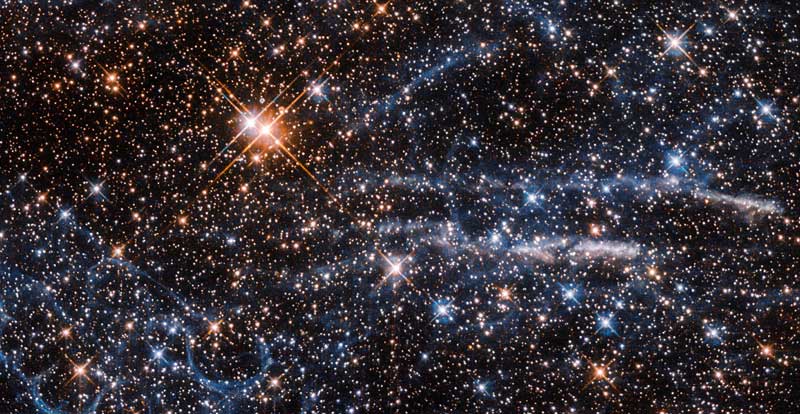 Credit: NASA, ESA, the Hubble Heritage Team (STScI/AURA), A. Nota (ESA/STScI), and the Westerlund 2 Science Team
Why stand behind this theory?

It accounts for many of the things astronomers see through ground- and space-based telescopes. It explains why other galaxies are moving away from us as space continues to expand. It accounts for a faint glow seen everywhere in the universe. (The glow is the leftover heat from the universe’s birth, now cooled to just a few degrees above absolute zero.) In short, it’s a remarkably powerful and elegant explanation of how the observable universe came to be.

The theory accounts for the creation of the lightest elements in the universe—hydrogen, helium, and lithium—from which all heavier elements were forged in stars and supernovas. An extension of the Big Bang, known as cosmic inflation, even explains why the universe is so homogeneous (evenly composed) and how galaxies are distributed across space.

Not that kind of inflation. Many features of today’s universe make sense if space underwent an extraordinary expansion very early in its history. According to inflation theory, the universe expanded dramatically a tiny fraction of a second after the Big Bang, driven by fantastic quantities of energy contained in space itself. After this period of inflation, the universe continued to expand and cool, but at a far slower pace.

Inflation stretched space out so quickly that it became extremely uniform. But space is not completely homogeneous. Small fluctuations in the density of matter present in the very early universe were massively amplified during inflation. These density fluctuations eventually created the large-scale structure of the universe, including great sheets, bubbles, and clusters of galaxies.

That’s the start. What about how the universe will end?

The concept of a Big Bang doesn’t indicate whether the universe will continue to expand and cool or whether it will eventually contract to another super-hot singularity, perhaps restarting the entire cycle. The ultimate fate of the universe likely depends on the properties of two mysterious phenomena known as dark matter and dark energy. Further study of both could reveal whether the universe will end in fire—or ice.

Like a history book of galaxies, this NASA video starts with a view of the thousands of galaxies in the Hubble Ultra Deep Field, then slowly zooms out to reveal the 265,000 galaxies in the larger Hubble Legacy Field. Based on observations from the Hubble Space Telescope, the galaxies shown here stretch back through 13.3 billion years of time to just 500 million years after the Big Bang. Credit

All familiar matter—Earth, the rest of the solar system, stars, galaxies, and interstellar gas—accounts for only about one-sixth of the mass of the universe. Scientists can see the effects of the rest of the universe’s mass, which they call dark matter. Its presence in galaxies makes them rotate more quickly than if only normal matter were there, and high concentrations of it noticeably bend light coming from far away. But its nature remains a mystery.

So what is it?

Dark matter may consist of elementary particles created in the Big Bang but not yet detected on Earth. One reason physicists want to build more powerful particle accelerators is to search for these missing particles.

Even more mysterious than dark matter is a force known as dark energy.

Why do I hear Darth Vader breathing?

This isn’t science fiction. Observations of distant supernovae suggest that space is permeated by an energy—called dark energy—that pushes objects apart, just as two positive electric charges repel each other. This mysterious entity, which accounts for more than 70% of the energy content of the universe, may be related to the energy that caused inflation.

But today virtually nothing is known about what dark energy is or how it exerts its effects on matter. Explaining it may require entirely new concepts of space and time.

How have astronomers learned about the early universe?

When astronomers look through a telescope, they are looking back in time. They see the Andromeda galaxy, the nearest major galaxy to ours, not as it is today but as it was more than 2 million years ago, because that’s how long it has taken the galaxy’s light to travel through space to Earth.

Other galaxies are much farther away in space and time. The Hubble Space Telescope can see galaxies that are more than 13 billion years old and formed not long after the Big Bang. Observations have been made of the cosmic microwave background, the faint glow left over from the Big Bang, that help to get a picture of what the early universe was like, especially before those first stars formed. Where do we go from here?

Astronomers are now planning a suite of new space- and ground-based telescopes and smaller-scale equipment and research. With these tools, they plan to study dark matter and dark energy, the black holes at the center of galaxies, the formation of planets like Earth around other stars, and many other aspects of our astonishing universe. An artist’s rendering of one of NASA’s new telescopes—the James Webb Space Telescope. When it launches in 2021, it will use powerful infrared vision to peer into the deep universe. Credit

Ready for the specifics? Take a look at New Worlds, New Horizons in Astronomy and Astrophysics.